Up to 20 deserving individuals will enjoy a surprise this festive season as Tiptree based garden centre Perrywood embarks on its Christmas Cheer campaign.

The centre successfully launched the campaign in November, asking customers and staff alike to nominate someone special who deserves a Christmas to remember. The campaign aims to spread cheer throughout North Essex and the centre has seen a flurry of nominations from across the local area. 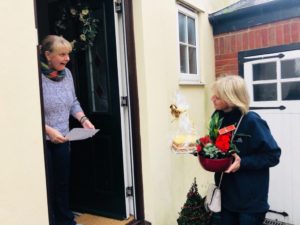 Nominations have been open for anyone who deserves an additional festive smile and examples have included hardworking carers, those struggling with ill health and individuals who go above and beyond to show kindness to others.

Lucky recipients will be gifted one of Perrywood’s planted containers, which will be hand delivered by one of the garden centre’s team members. Successful nominations have been selected and the first gifts have already been delivered, including some extra special surprises for recipients who were nominated by Perrywood’s staff members. The other deliveries will be taking place right up until Christmas Eve – just in time for the big day itself!

One of the deliveries which took place this week was to The Lomas family from Bicknacre. Charlotte Lomas suffers from polyglandular auto immune syndrome and her father has been unwell recently. Jayne Lomas, Charlotte’s mother, has been a great support for both of them through this very tough period and employees at Perrywood Garden Centre believed that they deserved a special surprise.

Perrywood Garden Centre communications and business developer Hannah Powell commented: “Once again, our Christmas Cheer campaign has been a huge success. It’s so important for us to support our community, especially during this time of the year. We recognise that for some people Christmas can be a lonely or emotional time if they are experiencing hardship, and others deserve some extra cheer in recognition of their generosity of spirit to others. We enjoy witnessing the reactions of the recipients – it can be overwhelming and we often even get tears of joy!”