A number of the first-time pet product firms returning from the Global Pet Expo in Orlando, Florida which was held in March have already expressed interest in exhibiting at the show again next year.

The innovative products shown by the UK exhibitors participating in the group organised by the PetQuip association attracted a wide audience from worldwide markets. 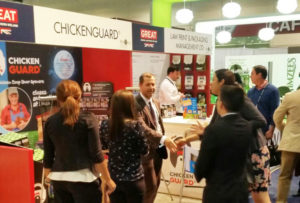 The PetQuip industry information stand on the pavilion provided a valuable link between the visiting overseas buyers and the UK pet industry and attracted over 60 visitors from over 20 countries. Most were from the US and Canada, with others attending from across Latin America. European visitors included distributors and retailers from Germany, France, the Netherlands, Italy, Denmark and Finland. Also in evidence were major distributors from Australia, New Zealand, Japan, South Korea, the Middle East and from the burgeoning online community in China.

The PetQuip association team, together with some of the British exhibiting group, also took part in a guided pet retail tour while in Orlando, which gave the British firms an opportunity to network with important buyers from the 10 countries that participated.

Commenting on the value of the business-creating events organised by PetQuip each year, Charlie Parker of PetQuip said: “Global Pet Expo has once again generated good international sales leads. During the show, one Danish distributor confirmed that it is currently working with around 10 UK companies, largely as a result of attending PetQuip ‘Meet the International Buyers’ days, and it also plans to visit the UK exhibitors at Zoomark in May this year and to attend the PATS Telford show in September. Several other key buyers also stated that they will be attending the Zoomark show, where PetQuip will be organising the British pavilion which will feature a record number of British exhibitors.”