At the 2016 GIMA Awards, this year’s Greenfingers Garden Re-Leaf Day (March 18) was revealed to be the most successful on record, raising £140,000. 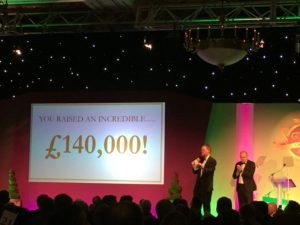 Activities such as the 24 hour Plant-athon, the HTA hosted charity walk in Berkshire, Richard Jackson’s QVC shows and trade promotions from top suppliers all helped the fifth annual garden industry charity day to its best result yet.

The 47% increase in fundraising also lead to the ongoing total raised by all those taking part in Garden Re-Leaf Day to increase to £410,000, a huge leap from the previous year’s count of £270,000.

Greenfingers trustee and Garden Re-Leaf Day founder Boyd Douglas-Davies announced the total raised in 2016 as exactly £140,000 in his annual address to attendees at the recent GIMA Awards – as well as next year’s date for the event – March 17. The Hillview CEO praised the combined efforts of the hundreds of garden centre teams, suppliers and individuals that took part, and finished by urging yet more to join in what continues to be one of the biggest and most rewarding charity events in the gardening industry.

The charity’s head of fundraising Linda Petrons attended the GIMA Awards, having recently celebrated the successful completion of Greenfingers’ 50th hospice garden in Sheffield. She said: “The support we continue to receive from the garden industry is just amazing and enables us to continue our work creating very special gardens for children and families that spend time in hospices right across the UK. Thank you so very much – we hope you will all continue to support us in the future!”

With the date set for next year’s event, with Greenfingers hoping for more garden centres, suppliers and organisations to get involved. The charity still has a long list of gardens needed for children’s hospices, and continues to rely on Greenfingers Garden Re-Leaf Day as its main fundraising day. More details on how to get involved in next year’s fundraising will once again be available at Glee this year.