Plant retailers visited two nurseries in Hereford last week (March 9 and 10) for their joint Open Days to see their new product developments for the coming year.

Wyevale Nurseries and Allensmore Nurseries held the Herefordshire Nurseries Customer Open Days to allow as many planteria managers and staff as possible to visit both sites efficiently and cost-effectively.

Wyevale Nurseries sales and marketing director Adam Dunnett said: “We were delighted with the response from all the customers who visited for our joint open days, it was a great opportunity for customers to view two of the country’s largest plant suppliers with 140 acres of container nursery space between us.

“We both showed off new varieties and ranges and the new product exhibition at Wyevale was particularly popular. Several new exclusive plants were launched including our Dahlia Candy Series range. We also had more than 400 votes cast and the winning hardy plant was a new variety of Jacobinia, which along with others will be featured at the Horticultural Trades Association (HTA) National Plant Show in June.” 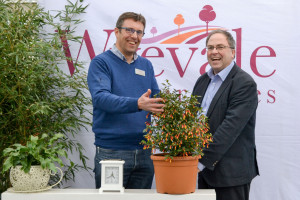 During the open days the HTA also offered workshops on profitable plant retailing. The seminars were designed to present new ideas for maximising sales and profits in an ever-increasingly competitive retail market place.

Coffee and lunch were also provided on both days promoting Herefordshire fayre, as well as competitions with a selection of prizes. As well as all this there were discounts on orders placed during the two days at each nursery.

Allensmore Nurseries managing director Mark Taylor added: “During the open days people who attended our nursery got to see the stunning, new Blooms of Bressingham range for 2016, which is selected for true garden performance.

“The teams at both nurseries put on a great show for attendees and I would like to thank everyone involved for their hard work.”