Greenfingers, the charity dedicated to creating gardens for children in hospices, is close to completing the relocation of the Royal Bank of Canada 2015 Chelsea Flower Show garden to the Earl Mountbatten Hospice on the Isle of Wight as planting began on the garden build.

Matthew Wilson, Greenfingers trustee and award-winning designer of the garden from Chelsea Flower Show 2015, was on site to plant up the garden.  Others getting their hands dirty in the final push to complete the garden included volunteers from the island, Craig Ratcliff and the team from CAR Gardens, who have built the garden, staff from the hospice and representatives from Greenfingers.

The Royal Bank of Canada, sponsor of the original show garden at Chelsea, donated the garden to the hospice with the aim of it providing a beautiful yet safe space for children at the hospice to benefit from. The relocation has been funded and facilitated by Greenfingers with further generous donations from Royal Bank of Canada, along with LOFA (Leisure & Outdoor Furniture Association) and others.

Matthew Wilson said: “It has been great to be here at the hospice planting up my Chelsea garden – it’s wonderful to see the garden being created once again in a new and very worthy home. As the garden is now almost finished I’m really looking forward to it providing a beautiful, enjoyable and safe space for the children and families who spend time here at the hospice to enjoy.” 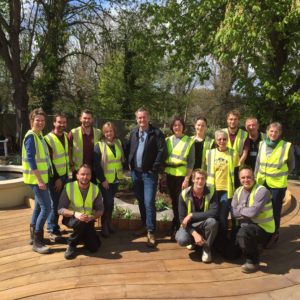 Earl Mountbatten was chosen as the recipient of the garden in recognition of its work developing services for children and their families on the island. Although the hospice has previously focused mainly on adult hospice care, it is aiming to expand its offering to care for local children who need hospice care, along with their families. The relocated garden will form part of the hospice’s offering to young patients, giving them a beautifully designed outdoor space in which they can relax away from the rigours of their care.

Greenfingers charity director Deborah Skillicorn said: “Greenfingers involvement in relocating this beautiful garden to its fantastic new home at Earl Mountbatten on the Isle of Wight has been a wonderful example of how we aim to help hospices by providing inspiring outside spaces.

“As the hospice here embarks on caring for more children and young people on the island, this project epitomises all that we try to do as a charity in marrying hospices and children in need with inspiring gardens which will, particularly in this case, bringing untold benefits to all who spend time in them.”

Chief executive of the hospice Nigel Hartley added: “Everyone at the hospice is delighted to see the wonderful Chelsea garden taking shape. The garden will be a fantastic addition to the outdoor space we have and an invaluable resource for the children here, giving them a truly inspiring place for play and relaxation.”

The Chelsea garden at Earl Mountbatten is due to be finished in the early summer and will be officially opened in July by much-loved gardening presenter, and Isle of Wight resident, Alan Titchmarsh MBE.