Queen of the Amaryllis thanks to rain water… 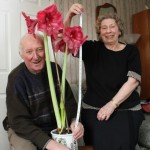 A TAUNTON plant lover was thrilled when an amaryllis bulb she had bought from a garden centre grew into a giant 32 inches tall plant.

Janet Fowler was disappointed when she did not receive her favourite bulb as a Christmas present and popped down to Monkton Elm Garden & Pet Centre, located at Monkton Heathfield between Bridgwater and Taunton, to buy one in January (2009).

Janet, aged 74, of Ruishton near Taunton, said: “My husband Tony has always given me one as a Christmas present but this time he bought me an orchid instead.

“So I went down to the garden centre and bought an amaryllis bulb in a gift box. All we have done is put it into a pot, given it rain water and we have watched it grow and grow.”

Under the tender care of Janet and Tony, aged 77, the plant, which is in their lounge, shot up to measure 32 inches from the potting compost to the top of the lily-like blooms.

The amaryllis has two main stems and each one is topped with four huge blooms. The bulb also has a smaller third stem, which may flower later.

Janet has grown flowering bulbs for the past 10 years and collects rain water in a tub for her indoor plants. She has never had an amaryllis reach this height before.

She was so thrilled with her plant she took a photograph of it into Monkton Elm Garden & Pet Centre to show to General Manager, Norma Moore.

Norma said: “It was amazing. I haven’t seen an amaryllis grow this tall before. It is nearly 10 inches or a foot taller than an average amaryllis and they don’t normally have so many blooms.

“It’s a very rewarding, easy to grow bulb with attractive flowers. We sold 1,000 amaryllis bulbs, either loose or in gift boxes, last year and in January, and the range is improving all the time.”

Amaryllis, which are also known as Barbados Lily, were discovered growing wild in  South America in 1828. Plants grown indoors usually reach a height of about 22 to 24 inches, but can grow between one and three feet tall with two to six trumpet-like flowers.

To find out more, please visit Monkton Elm Garden & Pet Centre, which is located just off the A38 at Monkton Heathfield between Bridgwater and Taunton. Alternatively, please call the garden centre on 01823 412381 or visit www.monkton-elm.co.uk.