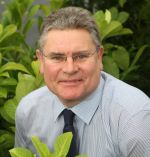 In his new position Richard will oversee the running of 10 garden centres in the North and West of the country from Telford in Shropshire up to Leyland in Lancashire.

The 47-year-old said: “I am delighted to have been given the role as Regional Manager for the North West. I have worked for The Garden Centre Group for 25 years. I took a short break two years ago after which I returned to the company to run Wyevale Hereford Garden Centre.

“I have also managed four other garden centres in The Group and was previously a Regional Manager for 13 years. I originally started as a Management Trainee back in 1985.”

Before beginning his career in the horticultural industry, Richard attended Thorpe Grammar School in Norwich and Pershore College of Horticulture in Worcestershire.

In his spare time, Richard enjoys spending time with his family and gardening.

Nicholas Marshall, Chief Executive at The Garden Centre Group, said: “I am delighted that Richard has returned to the post of Regional Manager. He is a plantsman, who started work as a garden centre trolley boy, which is an inspiration to all young people starting out on their careers with The Garden Centre Group.

“Richard’s experience is invaluable as we continue to strive at all our garden centres for horticultural excellence.”

Bring your senses to life….
Westland and Taylors come to bulb agreement
Tweets by GCUpdateUK