With under a week to go, Westland Horticulture and the Rising Stars Programme are getting ready to exhibit at this year’s RHS Chelsea Flower Show.

A total of three Rising Stars will be taking part and have created a specially planted container to exhibit, which will be seen by members of the public, journalists and perhaps even royalty!

The Rising Stars themselves will also be travelling to Chelsea Flower Show on Thursday, May 25 to tell the story of their container, which is based around the theme of ‘unusual containers’.

The containers will take pride of place in the ’40 Sunbury Road’ garden in the Great Pavilion next week. The garden has been created by the Horticultural Trades Association (HTA) in conjunction with Peter Seabrook and The Sun and is a celebration of Peter’s 40 years working at the newspaper. It aims to create a typical modest suburban back garden that consumers can relate to, whilst at the same time inspire and provide some new and interesting ideas that could easily be copied. Plants and sundries have been provided by suppliers and growers for this collaborative industry exhibit.

Here’s what the Rising Stars had to say about their creations which will be featured in the garden. 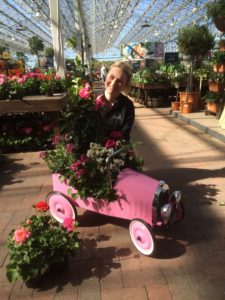 Kathryn Hunt from Stewarts Garden Centre in Christchurch, Dorset commented: “My container is created in homage to my beloved black Labrador Harley who died last year. One of Harley’s favourite pastimes was going for walks in Black Park, a vast woodland area with fields and heathlands and also a massive man-made lake. The plants in the container are plants that grow there throughout the park. The rustic barrel planter and the bark that has been used to top dress it, add to the ‘woodland’ look.”

Sarah Stewart from Klondyke Garden Centre in Falkirk, Scotland said: “I will be using a kettle barbeque as the container with a mini garden inside. This will be planted with a selection of alpines, ferns and grasses, some lovely pebbles to give it a landscaped look and some bunting to give a real sense of celebration.”

Emma Blackmore (pictured) from Bents Garden Centre in Preston commented: “I’ve created my container in a toy car which we have in our children’s Boutique at Bents range. It’s planted with some really bright and colourful bedding plants. I got inspiration from my daughter who spends so much time exploring and playing outside but doesn’t tidy up after herself, so you’re sure to find some sort of toy lying around.”

Keith Nicholson, marketing director for Westland Horticulture, sponsors of the Rising Stars Programme, said: “This is a fantastic opportunity for the Rising Stars and their garden centres to exhibit at the prestigious RHS Chelsea Flower Show.

“Not only will they have the opportunity to experience another element of the horticulture industry, but they will also be able to be part of the most important horticultural event in the world.”