During both days they gave PowerPoint presentations to each other showing the results of their recent merchandising projects.

IBBIS (UK) Limited director Ian Boardman, who facilitated the two-day-long events, said: “Some impressive results were demonstrated with sales and profits up 116% in one case and 150% in another on the products they focused on. The highest sales growth – using the principles covered in a previous workshop – was a fantastic 900% uplift in sales of hanging basket cones. For many of them it was the first time they had presented to a group and they all did very well. 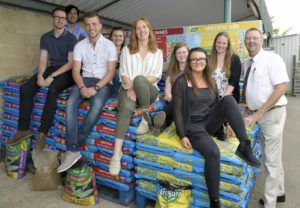 “The workshop at Monkton Elm Garden & Pet Centre coincided with a fantastic fundraising day the garden centre was hosting for Barnardo’s. So while building displays to showcase what they had learnt, delegates were boogying to a live jazz band and shimmying on their way to find props for displays. The centre was buzzing with customers too – who kept buying from their displays as they built them!

“All of this was going on under the watchful eye of a previous Rising Stars’ winner – Will Michieli. Will won in 2013 and is a team member at Monkton Elm Garden & Pet Centre.”

While at Bents in Cheshire, the Rising Stars’ visit coincided with the launch of its summer sale – with customers flocking in to pick up bargains.

Now that the Rising Stars have completed their spring projects and attended two workshops, a shortlist of the best 10 candidates will be selected for further challenges, leading up to the top five presenting at the GCA Conference in St Andrews in January.

Westland Horticulture marketing director Keith Nicholson said: “This is the time of year when the competition really starts. The Rising Stars programme is a pleasure to sponsor as the standard is always high and this year is no exception. We will watch and wait to see who steps up in the final stages and is ultimately crowned Rising Star of the Year!”

Candidates’ work has been assessed throughout the year to review the various elements on which the finalists have received training. The best performers will be invited to the 2017 GCA conference where they will showcase some of their work to the audience and talk about the difference it has made. A final winner will then be voted for by conference attendees.

GCA chief executive Iain Wylie explained: “Our Rising Stars programme, which is sponsored by Westland Horticulture, has been a huge success during the past seven years and once again we’re delighted with the standard of participants who all seem highly motivated.”