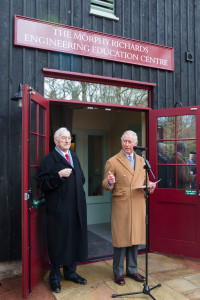 His Royal Highness The Duke of Rothesay has officially opened the Morphy Richards Engineering Education Centre.

The state-of-the-art facility on the Dumfries House Estate in East Ayrshire is designed to provide experiential indoor and outdoor learning in Science, Technology, Engineering and Mathematics (STEM) to primary and early secondary school pupils. It is sponsored by the parent company of Morphy Richards, the global electrical manufacturer Glen Dimplex.

The programmes run at the centre are designed to help schools across Ayrshire and further afield in delivering STEM-based activities, reflecting The Prince of Wales’s commitment to enabling more young people to explore careers in engineering and technology.

Following an official opening ceremony,The Prince of Wales met representatives from leading home appliances business Morphy Richards and the Glen Dimplex Group, as well as students making use of the new facilities.

He then toured the facility, which features four zones – imagine, design, build and test – based on the engineering design process, and is made up of classroom and workshop areas. The centre also boasts outdoor learning space for youngsters to engage through group tasks and other activities.

Martin Naughton, founder and chairman of the Glen Dimplex Group, said:  “The Morphy Richards Engineering Education Centre is a fantastic facility and Glen Dimplex is absolutely thrilled and proud to support it.

“Since 1936, Morphy Richards has been at the forefront of British design and innovation and we passionately believe that giving our young people the opportunity and building blocks to learn about STEM is vital in order to promote exciting and valued career opportunities in this important sector.

“The Morphy Richards Engineering Education Centre is an inspirational learning environment and will positively encourage young people to think more about how we make things, as well as the future of our planet and use of materials and energy for the benefit of both mankind and the environment.”

The centre is the latest addition to Dumfries House estate, which was saved for the nation by The Prince of Wales in 2007. Since then, the estate has become a thriving hub of activity for the local community, and for a number of The Prince’s Charities which run a variety of courses and summer schools on the grounds.

HTA provides update on ban of Neonicotinoids
Put the fun back into eating greens with Squire’s this half term!
Tweets by GCUpdateUK