Six members of staff from Wyevale Nurseries in Hereford were recently presented with medals to honour their long service to the company. 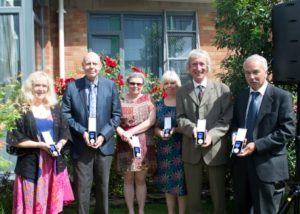 Wyevale Nurseries joint chairman Heather Williamson said: “Congratulations to Sandra, Geoff, Karen, Paul, Jackie and Phil for receiving their long service awards. They have given a collective of 195 years of service to the business. We can’t thank them enough for their continued hard work and support. We are blessed to have so many skilled and loyal staff members.

“Senior foreman Phil has devoted his 40 years’ service to field grown nursery production. The crops he has been involved in producing over this time has evolved through many millions of roses, fruit trees, conifers and ornamental trees. Phil is an excellent grower and skilled craftsman, always consistently producing top quality work. He is particularly expert in tree budding and grafting.

“Jackie is our potting supervisor and started working with us in 1983 by tying canes to growing plants. Over the years Jackie has worked in all departments, but in the last 30 years she has mostly focused on potting with the production team as a supervisor. Jackie is also our training coordinator for the nursery.

“Geoff, who is 65-years-old and the father of four boys, is our trading medium foreman. He has worked in many areas within the company, but the section he works in currently holds a special place in his heart – the Italian area. He has a vast amount of experience especially when it comes to trees. When Geoff started with us his hourly wage was £2.01 per hour – how times have changed.”

Karen, who works in sales support, started her career at Wyevale Nurseries in 1988 and was involved in all aspects of office work from stock control to order processing and general administrative duties. Due to the company’s rapid growth, Karen soon developed a skill for order processing, which has become her main role.

Heather added: “At a conservative estimate Karen would have processed orders for more than 40 million plants! Meanwhile, Paul started his career working out on our field department helping with production of bare root trees and shrubs. He moved on to the potting department as a foreman and then on to the container area and was in charge of the growing and despatching of amenity crops. His current role as container ground coordinator involves monitoring stock control, growing, checking for pest and diseases and acting as an advisor to other departments when needed.

“Sandra is our propagation supervisor and worked for many years at our specialist heather department and carnivorous plant nursery. Since moving to the head office site, her main role has been in propagation, but she has gained experience in all departments. Sandra is a hardworking team member and plays a vital role in propagation.

“Once again we would like to ‘thank’ Sandra, Geoff, Karen, Paul, Jackie and Phil for all their hard work and dedication over the years. We are very proud of each of you.”

Wyevale Nurseries is a member of The Three Counties Agricultural Society, which issues medals to people who have completed continuous service to horticulture or agriculture with the same employer or holding company.

“The Three Counties Awards seek to champion the long-standing contributions made by horticulture and agricultural businesses such as Wyevale Nurseries to the communities of the Three Counties. Sandra, Geoff, Karen, Paul, Jackie and Phil should be extremely proud of their achievements.”