Squire’s Garden Centre in Hersham celebrated the official launch of its newly extended and refurbished garden centre on Friday March 17, exactly 33 years to the day since it first opened in 1984. 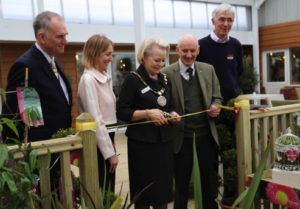 The Mayor of Elmbridge, Councillor Tannia Shipley, cut a ribbon with secateurs to officially open the new look garden centre. The shop and Café Bar are now 20% larger than previously, the plant area has a new layout with an extended glass canopy, the Café Bar has been completely refurbished with new furniture, and there is now a decked veranda area.

There was a gardening theme throughout the day as customers took part in ‘Planting Masterclasses’, followed by a ‘Gardener’s Delight’ champagne afternoon tea in the new Café Bar. Squire’s donated 10% of the ticket price to Greenfingers, a charity that creates magical gardens in children’s hospices.

Chairman Colin Squire commented: “Our Hersham garden centre opened 33 years ago on March 17 1984, and it has been very exciting to see it develop and grow over the years. My thanks go to the Mayor of Elmbridge for coming to officially open our new and improved garden centre, and to Tim Spearman, who has been the manager here for an amazing 33 years! Tim is a wonderful plantsman, and he runs a centre that sets the highest standards. His knowledge and his great rapport with customers and the local community have really contributed to the success of the garden centre over the years.”

Deputy chairman Sarah Squire added: “We are so proud of Tim and the whole team at Squire’s who have been involved with creating such a fantastic new look garden centre. I’m sure our customers, old and new, will enjoy coming here for many years to come.”