To celebrate its 80th anniversary, Squire’s challenged all its garden centres across the South East to design a floral display, which was wildlife friendly and referenced the company’s 80 years in the horticulture industry. 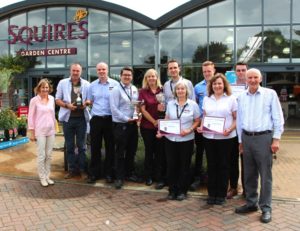 There were joint winners in the ‘Best Display’ category – Squire’s in Woking and Squire’s in Badshot Lea.

Squire’s Woking impressed the judges with their fabulous flowerpot man reading George Orwell, which was published in 1936, the same year that Squire’s was founded.

The winning display at Squire’s Badshot Lea has a wall specially created to make it look like authentic bricks of the 1930s, with a window through which you can see a vignette of the Squire’s Twickenham site (one of the first garden centres in the UK) and a mixture of planting including the Violet Squire Rose.

There were also two runners up in the ‘Best Display’ category – Squire’s West Horsley and Squire’s Long Ditton.

The winner of the ‘Most Innovative’ display went to Squire’s in Crawley, who created an elegant plant-focused display, using a ships wheel to make the number 80, and with a flowing river of blue flowers to represent the River Thames – which is very close to a number of Squire’s centres including Twickenham, Shepperton and Windsor.

Runners up in this category were Squire’s Cobham for bringing The Great British Bake Off to Squire’s with their magnificent birthday cake, and Squire’s Milford for their superb wildlife friendly display.

Sarah Squire commented: “I want to give a massive thank you to all of our garden centre teams who created such wonderful displays in celebration of the 80th anniversary of the company. Colin and I so enjoyed visiting each centre; however choosing the winners was not easy. Each display was so different and what impressed us the most was the thought that had gone into each of them, and the teamwork that made them happen. I hope that our customers will enjoy seeing these creative displays as much as we have.”