Squire’s Garden Centres have announced that they are donating £3,847.82 to the charity Greenfingers. This is the amount of money raised from the government 5p carrier bag charge since April 2016.

Squire’s customers have bought over 96,000 5p carrier bags in the last year, which has generated the money that is being given to Greenfingers, a charity which creates magical gardens at children’s hospices around the country. 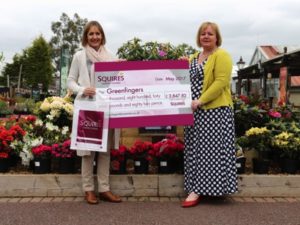 Deputy chairman Sarah Squire commented: “We are delighted to pass on the proceeds from the government 5p carrier bag charge to Greenfingers. They create such amazing gardens for children and their families to enjoy at hospices around the UK, at a time when these families are facing huge challenges.”

Greenfingers head of fundraising and communications Linda Petrons added: “We are extremely grateful to Squire’s for choosing to support us this way. This generous donation will help us reach our target of £1 million as part of our ‘A Million Moments’ appeal. Through the appeal we aim to bring the gift of a garden to at least 5,000 children and their families who spend time in hospices throughout the UK.”

The 5p carrier bag charge came into effect on October 5 2015. Since then Squire’s have donated a total of £5,676.90 from the carrier bag levy to Greenfingers. This is in addition to other fundraising carried out for Greenfingers throughout the year.