A plaque was unveiled on a 300-year old olive tree, which had been planted by chairman Colin Squire to commemorate the opening of the new centre. An olive tree was chosen as it’s a tree of great vigour, very hardy and easy to grow, and it is a symbol of abundance, glory and peace. 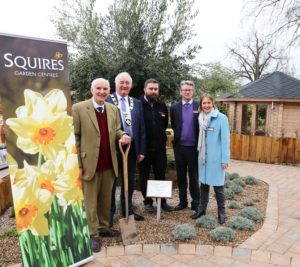 Invited guests had a tour of the garden centre, which has a new outdoor plant area and shop, with customers enjoying live music in the new Café Bar. The cosy and atmospheric Café Bar is housed in a 200-year old octagonal lodge building, which has been restored to keep its wonderful character.

Squire’s is a successful family owned business and £1.5 million was spent building the new garden centre. Matt Tanner has been appointed as manager of Squire’s Chertsey.

Chairman Colin Squire commented: “I am very proud to officially open our new garden centre in Chertsey. Thank you to the Mayor and Mayoress of Runnymede, and to other local business people for coming including The Chertsey Society, The Chertsey Chamber of Commerce, and representatives from the White Lodge Centre, an excellent charity that we support.

“Squire’s Chertsey is small but perfectly formed. We have a great team here, plus a few different products to make it a little bit extra special. I hope that the local community will enjoy coming to Squire’s in Chertsey as much as I do.”