Squire’s Garden Centres have announced their ‘Charities of the Year’ for 2017/2018. The charities include Princess Alice Hospice, Horsley & Bookham Riding for the Disabled, the 1st Fetcham Scout Group and the Aldershot & Farnborough Guide Dog Association, amongst many others. 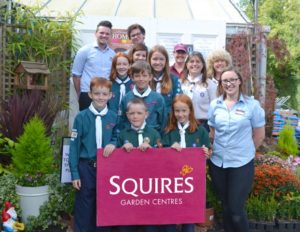 Team members at each Squire’s Garden Centre chose a local charity that they wanted to support. They will raise awareness of their chosen charity in the garden centre and through their marketing materials, as well as providing ongoing fundraising from collection boxes, events, and Squire’s ever-popular Christmas Grotto’s. All donations from the public will go directly to the charity.

Squire’s Garden Centres deputy chairman Sarah Squire said: “We are delighted to announce our ‘Charities of the Year’, which were chosen by our colleagues at each of our garden centres. Our Christmas Grottos alone raised over £24,000 for our chosen charities last year, so I hope that we will be able to repeat this success again this year. All of our centres are really looking forward to working with their chosen charity, and supporting their wonderful work in the local community.”