Josie Bryant, age 6, from The Russell School has won Squire’s Garden Centres competition to design a flowerbed at Teddington Lock.

Josie is the youngest ever winner of this annual competition in which local school children are invited to design a planting scheme for a flowerbed at the Environment Agency’s lock on the River Thames in Teddington. 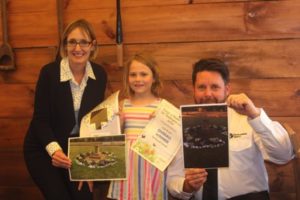 Children aged between 6-11 from The Russell School and Hampton Hill Junior School took part in the competition, which is run by Squire’s in conjunction with the Environment Agency.

The children were given a template of a circular flowerbed with a sundial in the middle, and had to suggest colours and patterns that could be planted up to reflect the design brief which was “The 60th Anniversary of the London Planetarium and 100 years since the first performance of Holst’s The Planets”. Josie’s winning design used purple and blue flowers to represent darkness in space, interspersed with yellow and white flowers to show the stars in the night sky.

Squire’s deputy chairman Sarah Squire and Mandy Marshall from the Environment Agency’s River Thames Waterways Operations team judged the designs, and the children who created the best designs in each age group were invited to a prize giving afternoon tea with their parents at Squire’s in Twickenham on June 27. All children who attended received a certificate and a goody bag from Squire’s, and Josie’s winning design has been planted up at Teddington Lock.

Sarah Squire commented: “I am always overwhelmed by the time and effort that all the children put into their designs, so congratulations to everyone who took part. It was lovely to meet the finalists at our special prize giving tea party at Squire’s in Twickenham. Josie Bryant was our overall winner and her design has been planted up at Teddington Lock and is looking absolutely fantastic.”

Mandy Marshall from the Environment Agency added: “We love being part of this annual event. The children’s designs are so imaginative, and I’m pleased to say that all the designs submitted will be on show at Teddington Lock throughout the school summer holidays. I hope that many people will come and see them, and the winning flowerbed design, which is planted up and is looking wonderful – it really brightens up the lock.”