Squire’s Garden Centres are holding a 24-hour ‘Plant-athon’ to raise money for the charity Greenfingers.

The Plant-athon has captured the imagination and support of the top UK garden retailers, Squire’s says, and Squire’s will be planting day and night in order to raise money for Greenfingers, a charity who create inspiring gardens for children and their families to relax in and enjoy at hospices around the UK. 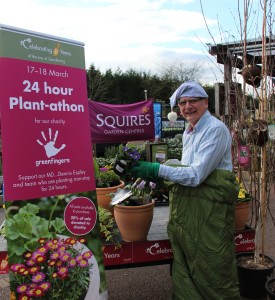 The 24-hour Plant-athon will start on Thursday March 17 at 2pm at Squire’s in Badshot Lea (near Farnham), and will then move to Squire’s in Twickenham overnight, finishing on Friday March 18 at 2pm.

Customers can come along to Squire’s Badshot Lea (Thursday March 17 2-6pm) or Squire’s Twickenham (Friday March 18 9am-2pm) to watch the Plant-athon, get hints and tips, ask gardening questions, and even roll up their sleeves and get involved in the planting.

Specially planted up Spring pots from the Plant-athon will be sold, and 20% from each sale will be given to Greenfingers, to raise money for the charity.

Squire’s managing director Dennis Espley is leading the Plant-athon, and he will be planting day and night throughout the event. Some special guests will be joining him:

Money can also be donated to Greenfingers through Squire’s’ JustGiving page, www.justgiving.com/squires-24-hour-plant-athon.