Stark & Greensmith’s range of architectural screens and panels for gardens, exteriors and interiors is now available from 191 trade installers and 16 retailers across the UK – and the network looks set to grow.

The company’s laser-cut panels have proved a hit with garden designers, landscapers, architects and consumers since the retail range was launched just 18 months ago. Now, Stark & Greensmith is seeking to sign up even more professionals to join its network. 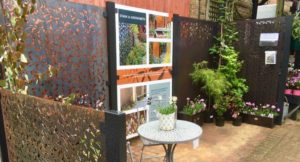 Featured on various medal-winning show gardens last season by designers including Charlie Bloom, as well as Alitex’s trade stands, Stark & Greensmith’s products can be used as boundary fencing, on terraces or decking to create a dining or seating area, as solar shading in pergolas, for screening in the garden, or formally as garden dividers to create ‘rooms’.

The company has also signed up a national network of registered trade installers with 191 members in England, Wales, Scotland and Northern Ireland. An increasing number of homeowners ordering the panels are using this hassle-free option, giving them peace of mind, the products are installed professionally.

Stark & Greensmith retail manager Adam Robinson commented: “We’ve seen a real demand for our panels as they are highly versatile, practical and stylish and can add a show garden feature in an instant, whilst still being affordable. It’s great news that so many retailers and trade installers are tapping into this and we’re keen to get even more on board, particularly those in the North of England, Scotland and Wales.”

The panels retail from £275, with a range of fixing accessories also available. The panels are affixed by steel clamps to aluminium posts, set in concrete just like traditional fence posts.