Stewart Garden, part of the Global Keter Group, has announced the winner of its ‘Win a £5,000 Garden Makeover’ competition.

The winner has been confirmed as Mr Russell Lester of Harlow. Russell will now have the opportunity to give his garden the overhaul of a lifetime, as he enjoys the freedom to spend the four-figure bounty in Harlow Garden Centre. 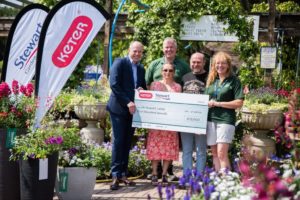 Russell said: “It was an enormous surprise to find out that I’d won the competition. I never win anything. Before entering the competition, myself and my wife were planning on giving our garden a makeover, so this has come at just the right time.”

On how he’ll be spending his winnings, Russell added: “We’d like a new decking area and patio. We already have some of the Keter and Stewart Garden products and we will be looking to add to those with some of their great new products.”

Russell won’t have any shortage of options at Harlow Garden Centre, which is part of the Blue Diamond Group. Beginning as a family-run enterprise, the garden outlet is now a key bedding plant and rose grower which supplies several of the London flower markets, as well as garden centres in the East Anglia region.

Blue Diamond Group group operations (retail enrichment) Peter Gibbons said: “It’s great to team up with Stewart Garden on such a superb competition. We are committed to working with our suppliers to create the best possible experience for our consumers. We congratulate Russell and look forward to seeing him in our garden centres as he spends his winnings.”

Entrants from all over the UK took advantage of the opportunity to win the ultimate garden makeover, resulting in a remarkable level of interest in the competition. Consumers entered by purchasing a Stewart Garden product in the month of May and by uploading photographs of their gardens to the dedicated competition website.

Entry into the competition was free, with Russell’s winning entry being drawn at random by Keter global business development director for gardening and planters category Alexander Masharov.

Stewart Garden managing director Andy Burns said: “We were very happy at the high level of participation that the competition generated, but not surprised as this was both an inspiring and aspirational prize. It was extremely gratifying to be able to give something back; firstly to Stewart Garden customers, but also to our supplier network – the participating garden centres. We are now delighted to announce the winner, and would like to take this opportunity to thank everyone who took part.”