Twenty four staff at Stewarts Garden Centres gained sponsorship of £5,500 for their Brave The Shave appeal for Macmillan Cancer Support. 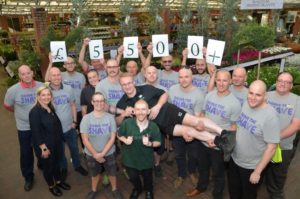 Visitors to the Christchurch Centre watched as both male and female team members had their hair shaved. Many of the men also had their beards removed as part of fun by local hairdresser Tracey Carter from the Blades salon who also performed a wax hair removal on the legs of Peter Scott one of the catering team. Plant Buyer Katherine Hunt has also donated her long locks of hair to the Little Princess Trust to be made into a wig for someone who has lost their own hair during cancer treatment.

Directors Martin Stewart and Terry Head also braved the shave that was organised by Christchurch centre manager Paul Hilliam after he announced he was ‘all clear’ after two major surgeries and embarking on an extensive course of radio and chemotherapy on his head and neck cancer.

Paul said: “I’m delighted that with this magnificent team effort we exceeded our original target of £2000. We owe this to our friends, family and the great support of our customers who also joined in the fun and entered fundraising raffles and competitions on the day.”

Managing director Martin Stewart said that he was proud and inspired by the goodwill that the team and their support for this initiative to fund this vital charity.

He added: “It was a fun day for the team who are now working hard to prepare the centres for a range of Halloween and Christmas events which will support local charities.”