Stewarts Garden Centres in Christchurch has announced the appointment of Paul Hilliam as centre manager. 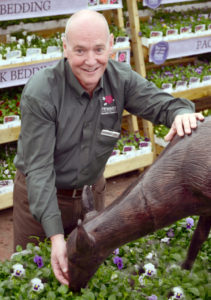 After a retail career that has taken Paul (pictured) across the UK after starting with the Great Mills chain and various locations with the Dobbies Garden Centre Group, Dorset born Paul has returned to his hometown with his appointment.

Stewarts Garden Centres managing director Martin Stewart says that he is delighted that Paul has joined the team and will play an important role with the company that can trace its origin back to 1742.

Martin added: “Last year we announced a multi-million pound refurbishment and rebuild for our country centre at Broomhill Wimborne Garden Centre and Nurseries, and acquired the Abbey Garden Centre in Titchfield, Hampshire. Adding Paul’s experience and enthusiasm to the management team will enable us to focus on the new development and the continued enhancement of the Abbey centre.”

The award winning Christchurch centre was officially opened in October 1961 and has seen major improvements and investment over recent years, including a restaurant size coffee shop.