Successor to runner is star of Mr Fothergill’s exclusives 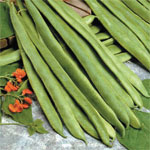 An improved form of Runner Bean, Scarlet Emperor, introduced in 1906 and long regarded as the classic variety, is one of nine new and exclusive vegetable seed varieties introduced by Mr Fothergill’s for the 2009 retail season. The new variety, called Scarlet Empire (pictured), is said to have improved disease tolerance while the long, slender pods are slower to become “stringy” than those of Scarlet Emperor.  It retains the excellent flavour of its famous forerunner.

Flageolet Beans may be new to many British gardeners, but Mr Fothergill’s Flagrano is as easy to grow as other dwarf beans.

While leeks are traditionally a winter vegetable, Kingston F1, another exclusive from Mr Fothergill’s, is quick to mature, giving long, slender stems which are ready as early as June. Shallot Conservor F1 produces single bulb shallots and is a half-long French type, the sort most highly prized by chefs.

The Kentford, Suffolk, company is also launching six new and exclusive flower seed varieties for 2009. The 15 exclusive new varieties are included in a total of 42 new vegetable and flower varieties introduced by Mr Fothergill’s.

For further details or to arrange a visit from a Mr Fothergill’s representative, telephone the order hotline on 01638 554111.