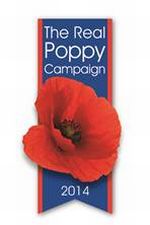 The seeds, grown and harvested in the UK, are being supplied by HTA member Thompson & Morgan.

The bright red Flanders poppies (Papaver rhoeas) also known as corn poppies, will be planted by thousands of people all across the nation during spring 2014 – for flowering late July/early August. The 2014 Real Poppy Campaign is the brainchild of The Greenhithe (Kent) Royal British Legion, Chairman, Phil Berry said; “We would like to see the UK covered in real Flanders poppies during August 2014, just imagine thousands upon thousands of bright red poppies growing alongside motorways, hundreds in every garden, hedgerows, fields, window boxes – the entire nation covered in poppies.”