Weeding is the most hated job in the garden, according to a new study of the UK’s gardening loves and loathes, conducted by gardening supplier Gardena.

Weeding came out top, named by over a third (38%) of the nation, while those quizzed also confessed that a tenth of their garden is made up purely of weeds, despite their best efforts.

Mowing the lawn was voted the second most despised job, by one in ten, while nine percent say trimming hedges is the most arduous garden chore. 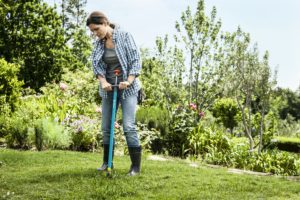 The research issued by Gardena explores the biggest gardening gripes, which saw the top five as:

The research also shows that Brits spend an average of three hours per month maintaining their garden – but as a nation we spend 41 hours per year unproductively in the garden, suggesting why these tasks feel overwhelming.

Watering is also a huge pet peeve for British gardeners, with one in five forgetful adults admitting their neglectful watering has led to plants dying. The Welsh (29%) are the biggest culprits, followed by the Scots (26%).

Gardena’s Paul Simpson said: “It’s not surprising that weeding comes out on top but it may be, in part, for reasons not just because it is backbreaking work. Our research shows that a tenth of budding gardeners admit they are unsure if they are removing a weed or a flower, and this lack of knowledge might be leading to a fear of the unknown when it comes to pulling up plants.”

But encouragingly, despite these irritations, gardening is still a much loved pastime: more than a third of Brits (42%) consider gardening as a hobby they genuinely enjoy while 39% see it as a great form of exercise.

Growing vegetables is revealed to be the most loved area of gardening by one in five (19%) green-fingered Brits – and almost one in five enjoy planting in the garden (19%) to ensure their garden looks its best. Londoners are the biggest show offs when it comes to gardens, with a quarter (24%) admitting they want to outshine their neighbours’ gardens,  closely followed by those in the North East (30%).

Paul added: “Some jobs in the garden are more rewarding; it’s enjoyable to watch the benefits of your hard work paying off, which is probably why they made the Love list.

“Either way, many of these jobs – love or hate them – could be made a lot easier with some simple tools, and gardening know how. For example, setting up an irrigation system in the garden so you don’t have to remember the watering each day could save people time and money.

“And knowing that 10 minutes every few days – weeding, mowing or watering – could be more productive longer term than hours spent once a month trying to maintain your precious patch.”