Suttons senior horticultural manager to retire after 44 years with business

Tom Sharples, currently senior horticultural manager at Suttons, is retiring after 44 years with the company. 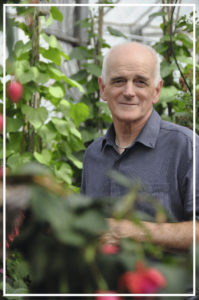 Tom initially joined the group with sister company Dobies as trial grounds manager when the company was based in Llangollen, North Wales. He then took charge of young plants and was responsible for the introduction of the first seedlings and plug plants available to the home gardener, in 1977.

Tom then was additionally put in charge of the Dobies catalogue, a position he held until the takeover of Dobies by Suttons and subsequently moved down to Devon. He was then given responsibility for the production of both Suttons and Dobies mail order catalogues.

A further move took Tom to the retail side of Suttons as marketing manager with further responsibility for product development, which among other things involved considerable travel around the world, looking for new and interesting seed and plant varieties and growing techniques suitable for the home gardener.

Latterly in his time with the company, Tom adopted a training and advisory role, mentoring young horticulturalists joining the company.

Tom is not planning to put his feet up in his retirement and will continue with his judging Britain in Bloom and RHS trials, together with lecturing and writing. He is also hoping to get involved in ‘putting something back’ in an industry he loves by working with schools, parents and children to encourage and improve gardening knowledge.