The Unwins Sweet Pea and Emma Bridgewater vase promotion has taken off, the brand has revealed, with over 8,000 claimants hitting the Unwins website in for the first 30 mins alone. 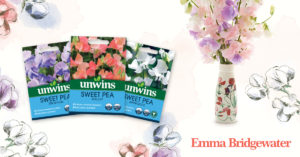 Due to the unprecedented demand, Westland is looking to extend the campaign and is calling for garden centres to make sure their Unwins Sweet Pea displays are at the front of stores to get maximum exposure over the coming weeks.

Hillier Garden Centre Group head of purchasing Andrew West said: “In the first week of the promotion from March 1-7 we saw a 25% uplift in Unwins Sweet Pea unit sales over the previous week, which we can only attribute to the successful advertising of the promotion. One centre had a customer buy 50 packets in one go!”

Shoppers were keen to engage with the promotion with comments on social media. One fan said: “Got hubby to go into the garden centre only for him to be told by staff that shelves have been cleared by one woman who spent hundreds of pounds shortly after the store opened!” Another said: “Sweet Peas are my favourite! Will be planting seeds in our new garden when we move house and the bottle will live on my dresser!”

Unwins brand manager Amy Roberts commented: “The speed and impact of this promotion has been outstanding and clearly shows the effect and impact social media has in driving consumer uptake. Its purpose was to bring Unwins Seeds to a new consumer base and to push our Sweet Pea heritage into the minds of consumers. I think it’s fair to say that we’ve certainly done this.

“In fact, it’s been so successful that we are now looking into ways to extend it over the coming weeks, so there is still time for your centre to take part in the promotion. If you would like to engage in the promotion please contact your Westland territory manager.”