Tim Vine to host a full house at the GIMA Awards

With bookings for this year’s GIMA Awards exceeding expectations, those lucky enough to have bagged a spot will be entertained by comedian, TV celebrity and actor Tim Vine. 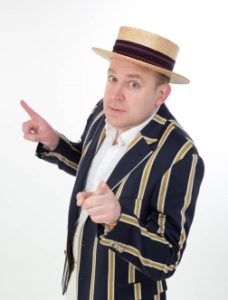 A regular on the comedy circuit since the 1990s, Tim has won numerous awards throughout his career, but is just as well known for his TV appearances on ‘Live at The Apollo’, ‘QI’, ‘Celebrity Mastermind’, ‘Let’s Dance’ and ‘Let’s Play Darts’. As well as appearing in various comedy acting roles, he appeared alongside Lee Mack in five series of the award winning TV show ‘Not Going Out’.

Tim will be hosting the hotly contested GIMA Awards, entries for which are now closed. The winners will be announced at the GIMA Awards Gala Dinner on Thursday July 14, which return to the Celtic Manor Resort near Newport, South Wales.

To book places at the Gala Dinner visit www.gima.org.uk/gima-awards.