With 140 years of horticultural experience between them, Thompson & Morgan’s newly formed new product development team is able to boast a rich diversity of expert horticultural knowledge, and is ‘pulling out all the stops’ for upcoming ranges.

Paul Masters (pictured centre left), who heads up the horticultural team at Thompson & Morgan, said: “I’m really excited about the range that we’re planning for next season. Our plant breeding team, led by Charles Valin (pictured centre right), has been working overtime and the new varieties that we’re going to be offering are phenomenal! Some of them are completely revolutionary in the gardening world.” 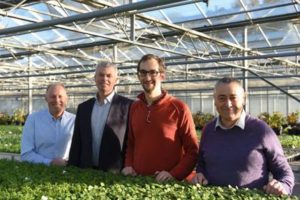 Paul brings over 36 years of horticultural and gardening expertise to the team. He started his career as an apprentice at Notcutts, rising to the position of production director and has travelled extensively in Europe and North America in his search for new and interesting plant varieties to offer to UK gardeners.

Colin Randel (pictured right) is widely known in the horticultural business as an authority on vegetables. His experience of growing and developing vegetables varieties to bring to the gardening public is second to none and extends to almost 50 years. Colin was Chair of the RHS Wisley vegetable trials subcommittee for eight years from 2006 to 2013.

Peter Freeman (pictured left) is the most widely travelled member of the team having visited the Far East and India as well as many European countries looking for new products to enhance Thompson & Morgan’s range. Over his 38 years’ in the horticultural business, he has worked in nurseries and garden centres, in buying and management. Peter has a particular passion for herbaceous perennials.

The line-up of Thompson & Morgan’s horticultural team is soon to be further boosted by the return of Kris Collins to the T&M fold. Kris takes up his new role as quality control manager on the horticultural team in mid-December and brings with him plenty of knowledge and experience gained from his almost 20 years in professional horticulture.