One of Yorkshire’s biggest independent garden centres is marking a year in business by sharing news of further expansion and plans to recruit 15 more staff.

Tong Garden Centre occupies a 17 acre site near Tong village, Bradford. It was acquired by Mark Farnsworth and Tom Megginson in May 2015, with a funding package provided by Yorkshire Bank. 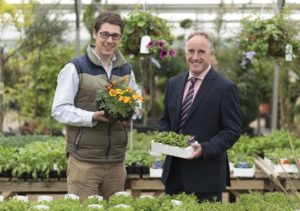 Over the last year, the new owners have implemented a series of initiatives including an extended plant area, a new coffee shop, a refurbished restaurant, a farm shop with a state-of-the-art bakery and butchery area, new flooring and lighting, and an area for concessions including Bon Marche, Maidenhead Aquatics and Mountain Warehouse. The total turnover for the first year’s trading at Tong Garden Centre was over £6m and forecasted turnover for 2016/2017 is well over £8m.

Mark Farnsworth explained: “We want Tong Garden Centre to be a destination centre for all the family and are investing a further £300,000 across three major projects this year to further that goal.”

Work is due to complete later this month to extend the Grasshoppers Adventure Playground – which was visited by more than 22,000 children last summer – by 50% to 4,500 square metres. This will see the installation of another ‘jumping pillow’, tunnels, playhouses and a large seating area with a hot food servery.

The expansion plans also include the creation of a new 300 square metre warehouse, which will give an 80% increase in capacity to cope with increased demand.  And finally, work is due to finish at the end of May on a major refurbishment of the 750 car park area.

Mark added: “When we acquired Tong there were 45 staff. We now provide employment for 135 local people and anticipate that this will rise to more than 150 by the end of 2016. The support from Yorkshire Bank ahead of the purchase and during our first year of business has been invaluable. As a result, we are firmly on-track with plans for the centre and have big ambitions for the future.”

Rick Warburton, head of Yorkshire Bank’s Customer Banking Centre in North Yorkshire, said: “Watching the ways in which Mark and the team have worked in consultation with their customers to transform Tong Garden Centre over the last year has been a privilege and one we’ve been happy to support. I can see only good things for this ambitious business in the future and I’m thrilled to hear that news of further expansion is expected to create an additional 15 local jobs this year.”