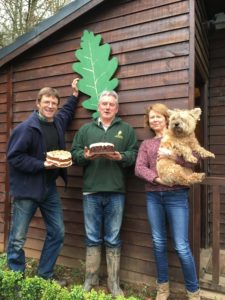 Steve, who was there from the start three decades ago, said: “It has been great fun seeing the gradual expansion from a two-acre rehearsal effort in 1987 using home devised tree seed treatments, basic kit and a few hired harvest workers to the expert staff and specialised equipment we have today.

“Thirty years have rushed by since Peter Williamson, the then chairman of Wyevale Nurseries, first had the idea to displace and replace the juggernauts of imported hedging and forestry stock and start in-house production of British grown, British provenance stock locally.”

He continued: “Production started in 1987 at a site 30 miles from the Hereford-based nursery head office site, selecting some land based near Ledbury and blessed by three factors – great sandy loam soils, an irrigation reservoir filled by winter excess stream flow and by proximity to the motorway M50 junction.

“Since then the fine science and art of growing young transplants from seed and raising in the field to a finished item, typically sold at 60-100cm tall, has been researched and rehearsed each season. A staff of currently some 25 transplanters has raised over that period some 60 million trees and shrubs for use in landscaping both urban and rural, forestry, gardens, estates and farming.”

Steve added: “I have met a huge number of memorable staff, suppliers and customers during the past three decades and I am indebted to them. Here’s to another 30 years!”