The most successful exhibitor in the history of the RHS Chelsea Flower Show is once again teaming up with the most decorated garden designer in the show’s history, hoping to win a 73rd consecutive gold medal.

Hillier is now officially confirmed as an exhibitor at the RHS Chelsea Flower Show in 2018. The company will once again enlist the expertise of garden designer Sarah Eberle, who has designed the Chelsea garden for Hillier since 2016. 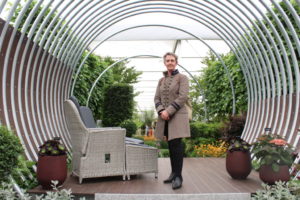 Sarah has won 15 RHS gold medals, 9 of which were awarded at Chelsea, and is the most decorated designer in Chelsea history, having won gold in more categories than any other designer. She is also the first designer to achieve a ‘treble double’ of golds; three years in a row of two gold medals for her gardens, which she accomplished in 2017. She will be hoping to further that total with her 2018 Hillier design and help Hillier maintain its position as the record holder for consecutive gold medals at Chelsea, with a remarkable 72nd won at the 2017 show.

Hillier head of property George Hillier commented: “Our Chelsea plans are well underway and the designs for the garden are flourishing. Sarah is working closely with our nursery team to ensure the very best plants are grown and selected, and we can’t wait to see the garden come to life in May. It may seem a while away yet but showtime will soon be upon us!”

Having exhibited plants at Chelsea in some form for over 100 years and maintained the record for consecutive gold medals, the Chelsea Flower Show grows more important to Hillier every year. The show is the platform from which the company launches many of its new plant varieties, showcases the vast variety of plants grown on its nurseries and demonstrates a continuing passion and commitment to horticulture.