Valagro launches plant nutrition product ‘ONE’ in the UK 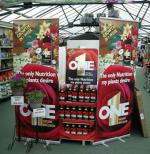 The Italian company Valagro is launching its plant nutrition product “ONE” in the UK. The company claims that the product has exceeded expectations in UK market trials, designed to assess its potential among the UK garden trade and consumers. ONE is a blend of nutrients and extracts from plants, including seaweed, corn, yucca and alfalfa. ONE has proved very popular in Italy following its launch in 2004 by the company, and will be formally unveiled in the UK at the Glee show in September.
Valagro is a world leader in plant nutrition products for commercial growers and gardeners – especially with bio-stimulant products derived from natural plant extracts. Valagro owns the Maxicrop group of companies, including Maxicrop UK.  The ONE market trials in the UK, which took place between April and July this year, encompassed 28 garden centres of various sizes and types up and down the country, in order to gain as wide a sample of opinion as possible. Valagro representatives held presentations for staff and each centre was provided with display pallets, containing the distinctive and very attractive 1 litre bottles of product, display banners and free sachet samples.
According to Maxicrop UK director Shane Deaville – who has coordinated the market trial on behalf of the Valagro parent company – the sachet concept has proved to be a valuable marketing tool. “Each sachet contains enough ONE to make up half a litre of ready-to-use plant feed. The consumer can take a free sachet and apply it to a single plant at home, and after a week they should have seen sufficient growth to encourage them to come back and buy a bottle,” says Mr Deaville.
He added: “The comments we’ve had back are highly encouraging. The majority of garden centres were very pleased with how it has sold and the majority have indicated that they are going to stock the product next year. There was no media advertising and sales have been comparable in some cases to some of the heavyweight names that have been on the market for years.”
After only a few weeks of the trial, Valagro took the decision to launch at Glee owing to the feedback it had received from these garden centres.
According to Fernando Ondarza, Valagro Garden’s foreign sales manager: “ONE is extremely simple to use. You don’t need to be an expert, you just pour on the solution and you’ll end up with better plants than you would with a straight mineral fertiliser. This is a general purpose product that will feed anything. ONE can be the only nutrition needed for all kind of plants. You can use it with fruit, vegetables, lawns, green and flowering plants. It comprises a careful balance of nitrogen, phosphate and potash, trace elements and even protected iron, so the product is also suitable for ericaceous plants such as rhododendrons.”
“From nature to nature” is one of  Valagro’s corporate slogans and summarises its philosophy. The company tries to select natural products, whether plant extracts or natural rock phosphates, which are then fed back to plants by the user, to obtain a “natural explosion” of growth.
One of the primary functions of ONE is to encourage rooting as well as rapid growth in the plants or vegetables themselves. In glasshouse trials conducted by Valagro in Italy on various species, significant growth could be observed after one week, with up to 25 per cent more fresh matter produced in this timeframe depending on the plant species and management system involved.
Detailed laboratory tests on ONE have been conducted by Dr Paolo Vernieri at the University of Pisa’s Department of Biology using rocket and chard in a soil-less floating system, and the results appear to have justified Valagro’s confidence in its efficiency. “ONE was strongly effective in stimulating growth and development of leaves and roots in rocket plants with respect to controls,” stated the report.
Another positive effect was an increase in the leaf chlorophyll content observed in the treated plants, which showed a deeper green colour and, therefore, had a superior visual appearance. In chard, ONE also showed a beneficial effect on quality parameters. The foliar nitrate concentration of treated plants was lower and the leaf chlorophyll concentration higher compared with control plants.
Suitable for indoor and outdoor use, ONE is available in liquid, water-soluble and microgranular formulations. The liquid version is available in 1 litre and 500ml bottles with clear drop-saving caps. The water-soluble version will be sold in 500g and 1kg packs, and microgranular is available in 1kg and 4kg versions.
ONE will be on show at GLEE at Birmingham’s NEC from September 21st to 23rd – Hall 5, Stand D34.
For further information telephone 07801 030436 or e-mail info@garden.valagro.com