One of the UK’s leading garden and horticulture manufacturers has joined forces with a national charity to become a horticulture partner for 2018.

Vitax Limited, which is based in Coalville, Leicestershire, will be working with ABF The Soldiers’ Charity to raise funds over the next 13 months through the sale of promotional packs of Q4 Pelleted Fertiliser.

Soon to be available at garden centres throughout the UK, for every 2.5kg pack of Q4 fertiliser sold, 20p will be donated to The Soldiers’ Charity.

Established in 1944, The Soldiers’ Charity is the National Charity of the British Army. Providing a lifetime of support to soldiers, veterans and their immediate families in times of need, the charity provides grants to individuals and to a wide range of specialist charities. 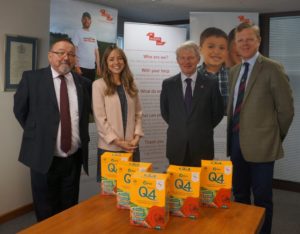 “However, we have looked at other potential charity partners where we can continue to make a true difference. The Soldiers’ Charity is a fantastic organisation that has impressed with the work it delivers to serving soldiers and veterans, and we are very proud to support The Soldiers’ Charity during 2018.”

Supporting a charity outside of the industry is not the only first for the partnership. Paul added: “For the first time Vitax will be utilising the popularity of its Q4 product range to raise awareness.

“Q4 is one of our fastest selling products and popular with gardeners, which makes it the ideal product partner. It is also a simple, quick and effective way to promote The Soldiers’ Charity to the whole gardening community.”

The Soldiers’ Charity has worked with veterans of every conflict for over 70 years and takes pride in being responsive and making a difference at a critical point in peoples’ lives. It is able to do so through the work of its partners, whose funds really make a difference to its beneficiaries.

Brigadier Robin Bacon, chief of staff, ABF The Soldiers’ Charity, said: “We are delighted to be working with Vitax as a horticulture partner.

“The partnership is a perfect fit with our supporters and with our ‘2018: Every Soldier – Past, Present and Future’ campaign, commemorating the 100th anniversary of the end of World War One.

“Since WWI, the use of gardening and plants has been used to aid soldiers and veterans and can be seen in our grants programme today.

“Beneficiaries of our charity have taken up gardening to improve their health and wellbeing, whilst others have pursued a career in horticulture, including the design of a garden for the RHS Chelsea Flower Show.

“There is a real synergy between the two organisations and we cannot wait to see how it will evolve.”