A national charity established to provide a lifetime of support to soldiers, veterans and their immediate families in times of need, has seen its funds boosted by over £10,000 through the sale of Vitax Q4.

ABF The Soldiers’ Charity received the donation from its horticulture partner, Vitax Limited, at a presentation event at The Cenotaph in Whitehall.

Vitax has been raising funds for The Soldiers’ Charity since November 2017, pledging to donate 20p for every 2.5kg special pack of Q4 fertiliser sold as part of the charity’s 2018 ‘Every Soldier – Past, Present and Future’ campaign, which commemorates the 100th anniversary of the end of World War One.

Over the past 12 months, the specially designed packs have taken pride of place on garden centre shelves across the country and have proved popular with gardeners looking for a premium, multi-purpose fertiliser.

Vitax chairman Paul Gooding (pictured right) commented: “This is the first time we have partnered with a charity outside the horticulture sector or used a product as a fundraising tool, but the response and funds raised have been phenomenal. 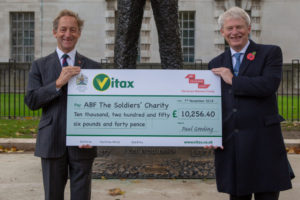 “This year marks the centenary of the First World War which serves as a poignant reminder of the sacrifices many have made, both past and present.  The work of The Soldiers’ Charity is so important and supporting veterans who fought selflessly for others is essential.

“Q4 is one of our most popular products and the garden centres have been very supportive. Raising awareness of the charity and its work is an important element of our partnership, as well as generating funds which have passed the £10,000 mark. This is a fantastic achievement and will help The Soldiers’ Charity provide further support where needed.”

Established in 1944, The Soldiers’ Charity is the national charity of the British Army.  Providing a lifetime of support to soldiers, veterans and their immediate families in times of need, the charity provides grants to individuals and to a wide range of specialist charities.

Receiving the cheque on behalf of the charity, Lieutenant Colonel Tim Coles MBE (pictured right), a regional director for The Soldiers’ Charity based at Wellington Barracks, says: “Every donation counts. The funds Vitax have raised are vital to ensuring we can continue to make a difference at a critical point in peoples’ lives and we cannot thank Vitax enough for their support.”

The Soldiers’ Charity has worked with veterans of every conflict for over 70 years and takes pride in being responsive, providing essential grants in as little as 48 hours to those in need.

Following the presentation it seemed fitting the cheque was also presented in front of the statue of ‘Monty’ – Field Marshal Viscount Montgomery of Alamein – who launched The Soldiers’ Charity’s first fundraising campaign in 1946.