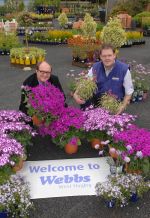 Award-winning Webbs has opened a second garden centre in Worcestershire. The family owned firm, which already has a very successful Garden Centre at Wychbold, near Droitwich, has taken over the former Hurran’s at West Hagley, between Kidderminster and Stourbridge.

Webbs has been managing the site since March, with the aim of securing its long term future and hopes to complete the deal by the middle of May. Webbs will retain the current 17 full and part-time staff and expects to recruit and double the workforce this year.

Chief Executive Boyd Douglas-Davies explained why Webbs had made the decision to expand.  “We think this site is in a wonderful location and the concessions, which include The Falconry Centre, will offer our customers a new and different experience – it’s a great opportunity for us.”

He added, “At a time when people are tending to shop closer to home, the new Webbs, West Hagley will allow customers to enjoy Webbs quality products and shopping experience without having to travel far.”

Douglas-Davies said the success of the Webbs Christmas Shop at Merry Hill Shopping Centre had proved there was a much wider customer-base in Worcestershire of people who did not travel to Wychbold.

Martin Saunders, who formerly worked for Hurran’s will remain as the Garden Centre Manager.