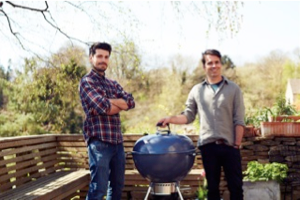 The world’s favourite barbecue heroes, Weber®, have signed Tom and Henry Herbert of TV’s The Fabulous Baker Brothers: A Bite of Britain, to become the faces of their UK Summer campaign; a first for the brand.

As part of the endorsement the brothers will be putting the spirit back into the community with the Weber® Come on Over campaign; encouraging people to reach out to their neighbours, friends and family and get together over great food on a great barbecue.

The activity will kick-start in May with a hard-hitting media campaign including the revealing of a nationwide survey and competition. The collaboration sees the foodie family develop a series of recipes for Weber®, share their hints and tips as well as create exclusive and inspiring content for on and offline media.

Said Henry Herbert “We’re delighted to be ambassadors for Weber. Tom and I have used and recommended their barbecues for so many years; to be honest our friends already thought we were in partnership. Having a decent bit of kit makes life so much easier and with Weber products you can really add variety to your barbecue menu from smoking and grilling to pizza making or creating your perfect Sunday roast – I even baked Tom’s birthday cake on there!”

Chris Trewhitt Weber® UK Marketing Manager said “Tom and Henry are the ideal fit for the Weber brand. They’re great family men and are heavily involved within their local community which fits our “Come on Over” ethos perfectly. They’re also genuine users and believers in our products even running a Weber Grill Academy at their Hobbs House Bakery, teaching people how you can cook a real variety of food on the barbecue using Weber’s “lid on” cooking methods.”

The collaboration with Tom and Henry will form an important part of Weber’s wider  ‘Come on Over’ campaign which launches thisApril. The campaign includes a tailor-made TV advert airing on terrestrial, satellite and on demand, supported by extensive digital activity including a dedicated interactive microsite. More information will be available on www.weber.com.