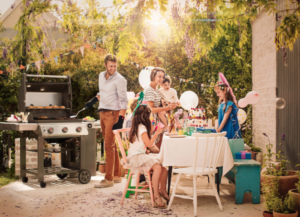 Barbecue brand Weber has launched its Spring Start campaign to get the UK and Irish public thinking about their outdoor living space.

Running until April 17, the promotional drive is set to encourage people to prepare their garden, including their barbecue, ready in time for the first rays of sunshine to make the most of the upcoming Spring/Summer season and beyond.

While the peak time to purchase a barbecue is between May and June, Weber notes that this promotion is designed to drive consumers into store earlier and give them an incentive to buy during March and April, increasing early season sales.

The nation-wide Spring Start promotion offers customers a free iGrill 3 (retail price £89.99) with any purchase of the new Genesis II from March 18 to April 17. The campaign is set to drive traffic to stores through local radio and digital advertising.

Country marketing director Chris Trewhitt said: “Our Spring Start campaign and the fantastic Genesis® II offer will drive customers into our retail partners to purchase barbecues earlier than ever before. This initiative is a precursor to our biggest campaign launch in 30 years, the Genesis® II series, meaning we will have a continuous stream of marketing throughout the season to raise the awareness and consideration of Weber.”