Andy Burton has been voted the Garland/Worth Gardening ‘Sales Agent of the Year’.  Andy is responsible for the company’s sales in the West Country, and featured in the awards in both 2013 and 2015.  He was chosen for the award in 2017 for achieving 24% growth in sales. 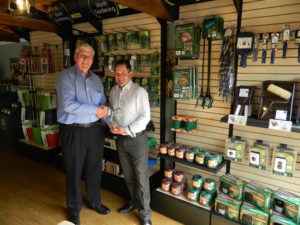 Scooping second place in the awards were Mervyn and John Ducker who cover East Anglia, and third place went to the Stevenson Agency which is responsible for sales in both Northern and Southern Ireland.  The presentations were held at the company’s Sussex distribution warehouse on 17 and 18 August.

Operations director Tony Dedman said: “Andy, Mervyn, John and the Stevenson Agency are to be congratulated for taking full advantage of the 100 plus new products and retailer promotions launched at Glee 2016. Following their successes in 2016/17, all members of our sales team, covering the whole of the UK and Ireland, will be supporting our other staff on our exhibition stand at Glee 2017. We look forward to welcoming existing and potential customers to view the 70 plus new products being launched for the 2018 season. Our latest innovations will be shown alongside other popular garden and hardware items from our ever-widening product portfolio.”

Apart from its successes in the home market, Garland/Worth Gardening is also making further inroads into export markets. In between the sales agent presentations and Glee 2017, Garland/Worth Gardening had a major presence at the spoga+gafa international trade exhibition in Cologne, where the company received an order from a new account in Norway that included some of the company’s new products. The UK company also received new garden furniture covers listings from its Spanish distributor, as well as large potential orders from Germany and Australia that will involve over 30,000 of Garland/Worth Gardening’s new grow pot towers.