The second of two GIMA Day Conferences of 2016 saw over 90 delegates enjoying talks from industry experts, networking opportunities, and the chance to meet representatives from Wilko and British Garden Centres Group.  The event was hosted at Clumber Park Hotel and Spa near Worksop, Nottinghamshire on Thursday December 8.

The conference was opened by Josh McBain from the Future Foundation, who spoke on the implications of the UK economy post-Brexit, with key projections and how this might impact on the garden industry.

“Although it is still unclear what the government has planned, this is not a UK-only story, this is part of a wider narrative,” he said. “Due to rising anti-EU sentiment and the mainstream view of the union as a poor deal for leading economies, we are more than likely headed for a hard Brexit, as the EU will want to deter other countries from following suit.”

Josh added: “The pound will continue to affect inflation and therefore consumer spending, and with crude oil prices expected to recover from an artificial low, the price of manufacturing is set to increase. However, there has been a significant boost in tourism for the UK, which is expected to rise by 7% in 2017, with £2.4bn forecasted to be spent by Brits taking staycations.”

Josh concluded his presentation by noting: “There is an opportunity for UK businesses to capitalise on this renewed interest in all things British and revitalise their brand accordingly.”

British Garden Centres managing director Philippa Stubbs echoed these thoughts. “Increased domestic tourism is certainly giving us a real boost,” she said. “Not only are most of our 10 garden centres all within easy reach of each other, but we also own a leisure park, where customers stay and then include the garden centre as part of their staycation activities. Garden centres actually present a very attractive low cost family outing – so long as there are adequate play facilities and versatile, well-run restaurant areas.”

Phillippa revealed that British Garden Centres is looking to expand its own branded goods ranges further and gave a few hints for suppliers looking to work with them. “We want to create an exquisite shopping experience for our customers, make it easier for them to shop and provide a great day out, and the products we sell must reflect these core values,” she explained. “We are looking for innovative products, with concise packaging – UK made is a huge plus, as are sensible price points with clever deals that don’t devalue the product category. More supplier sponsored staff training would also be well received as it really does work to motivate staff and sales.” 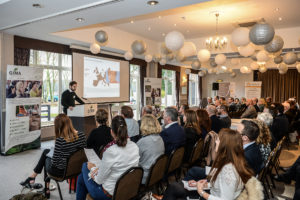 After lunch, Wilko chief operating officer Sean Toal underlined his business’ objectives for the future, touching on some key aspects for suppliers to take into consideration. Hard working families, ‘Empty nesters’ and university students are key demographics for the company, he noted, and with that a greater need to educate customers to help them save time and money.

The Wilko buying team followed their COO with a presentation that provided further insight into the business for the benefit of suppliers in attendance. Wilko senior buyer Kate McCartney revealed that during the last 12 months in the garden and outdoor category 40 million units were sold, generating £115 million worth of sales. The company’s 400 stores are located in a wide variety of locations, from urban shopping malls to out of town shopping destinations, with plans to open more in 2017.  Digital sales were becoming especially important she said, with 20% of sales accounted for online.

Wilko head of garden and outdoor buying Lloyd Taylor talked in detail about omnichannel retailing. “More than ever suppliers need to embrace digital,” he said. “The lines that perform well online, believe me, if they are right for our customer, will feed through to the shelf. We consider digital and bricks and mortar as not just the sum of its parts but something much greater, and a fundamental part of the customer experience.”

Own brand ranges are worth £850m a year to Wilko, who would like to work more with suppliers on creating further ranges that are quality and value for money, the company said. But equally important, especially to their customers, said Lloyd, were brands. “We can’t credibly sell own brand products such as ferts and chems, unless we have built a reputation on supplying trusted brands,” he explained. “We want the big brands, and in general a well edited range that doesn’t overwhelm our customers.”

He added: “We want to help customers digitally, and instore, get to the solution they want, the product they want, with as much ease and confidence as we possibly can.”

The next GIMA AGM/Day Conference will be held on March 23 2017 at Horticulture House, Chilton, Oxfordshire, with guest speakers to be confirmed.