The annual contest, which was set up to reward the gardening skills and creativity of schoolchildren aged between six and eleven across the UK, was very tough this year. However, the Cheltenham-based school came out on top, securing themselves a prize of £1,000 to spend at their local garden centre.

Stewart Garden set up the Schools Programme to get more children interested in gardening, providing participating schools with a special kit that they can use to set up a gardening project of their choice. Every year, these results are submitted to a discerning panel of judges, who award the lucky winners with the prize money to support them in future projects. 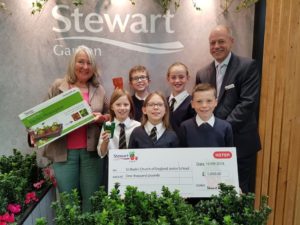 One of the people who had the difficult task of deciding on the winner and runners-up was award-winning garden writer, photographer and lecturer Val Bourne, whose impressive list of publications include The Daily Telegraph.

Val said: “Firstly, congratulations to all of the finalists. They made full use of Stewart Garden’s materials and obviously enjoyed themselves.

“It was incredibly hard to choose a winner because there were two schools that shone. I’d particularly like to commend runner-up Cecil Road School, as their children showed such enthusiasm and learnt lots from the project. Their scientific conclusions were spot on!

“The St Mark’s Church of England Junior School kids were also very impressive and very independent. They took complete control of their project and are even planning a cookery club.”

Stewart Garden managing director Andy Burns added: “Congratulations to everyone who participated in the competition this year. As a company, we’re committed to the teaching people the benefits of gardening and growing your own produce.

“Indeed, the initiative the St Mark’s children have shown with their cookery club embodies the aims of the Stewart Garden Schools Programme, as the children have clearly been inspired to grow and use their own fruit and vegetables. It’s more important than ever to teach children self-sufficiency and the origins of their food, so gardening, cooking and growing are all fantastic things to teach young people.”