A flourishing North East garden centre has secured its long-term future and safeguarded up to 50 jobs after acquiring its Woolsington site as the family firm celebrates four decades in business. 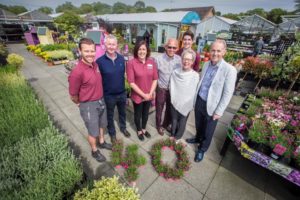 The award-winning Cowell’s Garden Centre, which was established in 1978 by Alan and Mavis Cowell, was left facing an uncertain future with the end of the business’ current tenure drawing closer and the landlord pursuing plans to develop the site for residential housing.

The search to secure a new home for the business, which is now run by co-directors Martin Cowell and Jane Keating, Alan and Mavis’ children, alongside financial controller Darren Woodmass, began in 2012 when they first sought guidance from Gordon Brown, a consultant at Gordon Brown Law Firm LLP (GBLF).

With the family still struggling to find a suitable location by late 2017, Gordon recommended they put in an offer to the landlord to purchase the site – an offer which was accepted, with the deal having now completed.

Martin Cowell commented: “Following a long period of uncertainty for the business, we can now call Woolsington our permanent home. We are extremely grateful to our team of trusted advisors at GBLF, Tait Walker and HSBC who all worked seamlessly as a team to help us navigate what was a complicated process. Working in such a collaborative way was integral to ensuring we were able to acquire the site. We are also very thankful to our dedicated team, which has remained loyal to us, as well as the local community who have supported us over the years.

“We are delighted to have been able to safeguard the future of the business and our employees’ livelihoods as we celebrate four great decades, and we look ahead to the next 40 years, and beyond.

“Securing the site forms a key part of our strategic growth plan which will allow the business to thrive, as we further expand our range of plants and nursery products over the next three to five years, whilst creating new jobs.”