Writtle College crowned Best in Show in the Young Gardeners of the Year 2015! 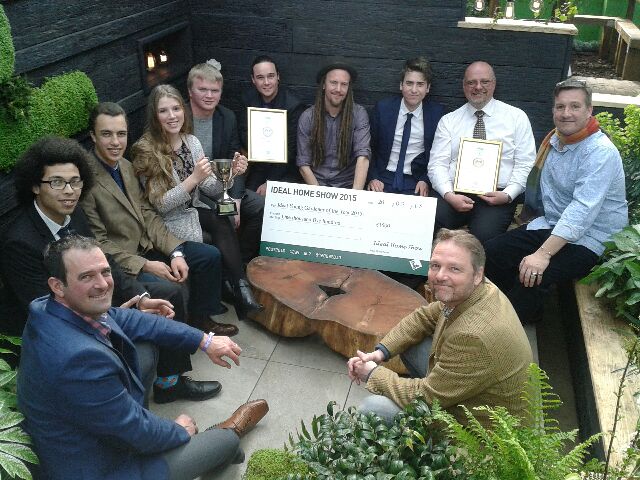 Writtle College has today won Best in Show in the Young Gardeners of the Year competition at the Ideal Home Show 2015!

Celebrity horticulturist Alan Titchmarsh, one of the judges, said he was proud to be Writtle College patron while competition organiser and TV gardener David Domoney described the garden as “beautiful” and said the accolade was “well-deserved”.

The College was one of only two teams to win a gold medal before taking the top honour at London’s Olympia. The team were handed a trophy as well as £1,500 prize money.

Simon said: “I am absolutely over the moon for the students! They have put in so much effort. All the hard work has paid off! This is so good for their CVs.”

Ben added: “When they announced that we had Best in Show I felt an enormous sense of relief as I really felt we had earned it. It feels fantastic! The quality of this year’s garden is exceptional – it is really great to hear the feedback from the judges. This has got to be one of the highlights of my career and to see the team on stage celebrating was a personal high!”

One of the students, Joshua Kemp, said: “I am very proud of everyone on the team. They have put the hours and effort in and it’s paid off!”

Francesca Le Maistre Banham added: “I am speechless! When I started the course at Writtle College I could only hope that I would be sitting here at the Ideal Home Show with a gold medal and Best in Show with these grins on our faces! It’s the highlight of my College experience so far!”

Sam Moore, who has recently won the Regional Final of the Young Horticulturist of the Year, said: “We really want to give Simon and Ben our thanks. The course is excellent – it’s given us the skills to be able to build a garden like this and the opportunity to be part of a major show while we are still students!”

The contest is run in association with the Prince’s Foundation for Building Community and sees six of the UK’s leading horticultural colleges go head-to-head to create a show-stopping sustainable garden.

They had to design and build a garden in a 5.5m x 4m plot in the heart of the Ideal Home Show. Although they could pre-build elements of the design, they had less than four days to assemble the garden.

The brief was reclaimed urban space, with the emphasis on the sustainable use of water and water harvesting.

Ben said: “We have made a garden that is ‘high end’ with the aim of showing that you can achieve a slick-looking garden in a small, urban environment at a lower cost, using recycled materials and sustainable methods.”

The team has created a green oasis in the city which reduces dependence on mains water and helps to clean the air. Five large alnus trees create a woodland feel, but the garden has clean lines and slick materials.

Millboard decking is used along the walls, interspersed with ‘bricks’ of Mind Your Own Business. Distinctive Edison-style retro lighting encased in the walls creates a warm glow.

A table made out of huge logs from Easton Lodge, which have been sanded beautifully smooth, sit upon porcelain paving imported from Italy. There are also benches made from recycled scaffolding boards, which the students have carefully cut out.

There is a water feature, rain harvester and irrigation cycle in the garden, with a gravel filtration system to prevent greening and dirty water build-up. An attractive rill flows around the planting areas and feeds irrigation tubes to the plants, while also providing the sound of water movement as an escape from vehicle sounds and the noise of the city.

In the spirit of sustainability, many of the plants have been recycled from last year’s garden and the aim is to filter and clean the air to reduce pollution in the urban environment. The planting scheme supports the woodland feel, with plenty of ground cover plants and a range of shrubs. There is drought-resistant asplenium fern and stipa grass. On the top of the wall the team have grown equisetum japonicum as part of the filtration system from the rain harvesting.

The team used Pinterest to bring together their ideas and used the huge Amenity Building at Writtle to build in advance elements of the garden so they could then be dismantled and put together like a construction kit at the Show.

David Domoney said after the awards ceremony: “What’s different this year compared to previous years is that the teams have less time to build. What’s clever about this garden is the enormous detail they have managed to put into the garden in such a short time. If you build anything component, as they have done, then it takes three times as much work as you have to build it, dismantle it and then assemble it. It’s like a jigsaw puzzle without a picture.

“The use of specimen size trees has created a garden that is not fully revealed from the front and entices you in. The dark timber is complemented by the green planting and the subtle lighting changes it from just being functional to being a feature. The streaming of the water around the garden has given it a well-deserved gold and Best in Show.”

Simon said: “Working with new materials and products is great for the students and enables us to produce quality show gardens. We welcome the sponsorship these companies have given us and they have been integral to us achieving Best in Show.”

This year’s show gardens were judged by an expert panel, including horticultural industry leaders, home and garden magazine editors and acclaimed garden designers. Entrants competed to win gold, silver gilt, silver or bronze awards. The overall winner received the Best in Show award, and visitors will be able to vote for the winner of the People’s Choice Award.

Neil Domoney, one of the judges, said: “This is the best garden we have ever had here; that’s what all the judges were saying in the judging room. It should be at Chelsea. It’s very hard to fault.”