Hereford-based Wyevale Nurseries has featured in a new BBC series to find the best aspiring garden designer in the UK. The nurseries got involved with the programme, called The Great Chelsea Garden Challenge, last August when it was being filmed and appeared in the second episode last night (May 12). 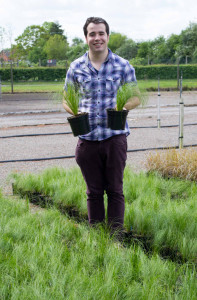 Wyevale Nurseries sales and marketing director Adam Dunnett explained: “The series was made in conjunction with the Royal Horticultural Society (RHS) and we were delighted we could help by supplying a selection of our plants.

“In each episode the contestants must design, build, shop for and plant a show garden in a different style. At the end, one person wins judges’ gold and one designer goes home. The five remaining contestants used our plants to create their formal gardens at Sudeley Castle in Gloucestershire. We supplied items including Stipa tenuissima ‘Pony Tails’, Hebe rakaiensis and Buxus sempervirens.

“The contestants had to impress RHS judge James Alexander-Sinclair and gold medal-winning garden designer Ann-Marie Powell. They had just four days to showcase their design skills, and their gardens had to include a two-metre-high piece of topiary that they have shaped themselves from Buxus hedge.

“The nursery and plants looked absolutely fantastic on the programme and we were pleased that both the contestants and experts made positive comments on the quality of our stock.”

The winner of the competition will get the chance to design a show garden feature on the RHS Stand on Main Avenue at the RHS Chelsea Flower Show in 2015.