Hereford-based commercial nurseries Wyevale Nurseries has announced that it raised £1,042 for Greenfingers by backing its ‘Turn Old into Gold’ fundraiser.

Wyevale Nurseries raised the money throughout 2016 from the initiative, which sees discontinued or unwanted stock auctioned off in aid of the charity, which creates gardens at children’s hospices nationwide. 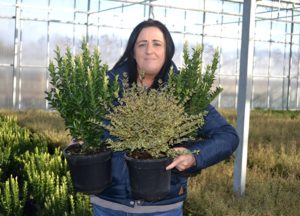 Wyevale Nurseries sales and marketing director Adam Dunnett said: “Our aim at the end of 2015 was to raise at least £1,000 for the charity in 2016 and we’re delighted that we managed to reach our goal. Greenfingers is such a great charity and does a fantastic job creating magical gardens for children with life-limiting illnesses and their families in hospices across the UK.

“We donated a selection of plants to the Greenfingers’ Turn Old into Gold campaign fundraiser last year and will continue to do so throughout 2017. It’s great that we can dispose of unwanted stock and know that it will be going to a good home while also raising money for a worthy charity.”

He added: “The money raised by Turn Old into Gold will go towards the ‘A Million Moments Appeal’, which was launched in July 2015 and aims to raise £1m in three years. This is to enable Greenfingers to bring the precious gift of a garden to at least 5,000 more children and families who spend time in a hospice.”

The fundraiser is supported by wholesale logistics company Decco. Greenfingers will arrange for plants/products to be taken to W & H Peacock Auctions in Bedford who will auction the goods and donate all the money it raises to Greenfingers.

Goods can be collected as Greenfingers will contact Decco who will then be in touch to arrange the collection and delivery to W & H Peacock Auctions. All deliveries collected by Decco will need to be on shrink wrapped pallets or boxed.

Greenfingers head of fundraising and communications Linda Petrons said: “We would like to say a huge ‘thank you’ to Wyevale Nurseries for raising £1,042 by taking part in our Turn Old into Gold campaign. Adam and the team have supported the campaign for several years now and their support is much appreciated. We hope many other horticultural businesses get involved with the fundraiser this year.”