Hereford-based Wyevale Nurseries has revealed that its tree sales were up 22% year on year from August 2016 until the end of January 2017.

Wyevale Nurseries’ tree sales have been driven by domestic landscapers and landscape contractors, who it says are concerned with biosecurity.

Wyevale Nurseries sales and marketing director Adam Dunnett said: “One of the buzz words in the industry at the moment is biosecurity and ensuring that plant stock is coming from a known source without the danger of importing pests or diseases. 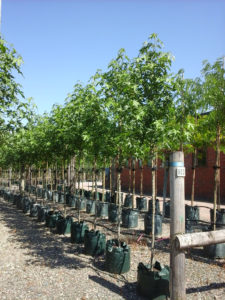 “Trees are a particularly sensitive subject when it comes to biosecurity. Nearly 90% of our tree sales come from UK grown stock and 98% of those sales are from our own production. The other 10% come from all over the world and are vigorously screened before entering the country.

“We have also seen a bit of a comeback from some old favourites such as Carpinus betulus ‘Frans Fontaine’, Crataegus laevigata ‘Paul’s Scarlet’, Prunus ‘Sunset Boulevard’ and Prunus avium.”

Adam added: “We have also seen an increase in demand for pleached trees, mainly Carpinus betulus and we’re able to create these to customer’s size requirements. Pleached are commonly used to create a green screen above a fence level or a raised wall. We have a selection of pleached Carpinus and Prunus varieties available as container grown trees.”