Peter Seabrook, gardening correspondent for The Sun, is behind the garden industry show garden, which will include the involvement of 100 growers and suppliers, including Wyevale Nurseries. 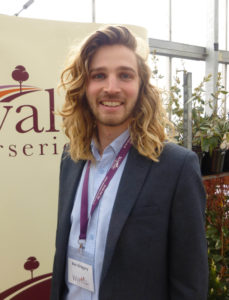 Wyevale Nurseries product development manager Ben Gregory (pictured) explained: “We’re delighted to be involved with this show garden and release our new plants for the first time this year. As well as the new plants for 2017 we have also supplied five other relatively new introductions that have been very popular.

“The objective of the ‘40 Sunbury Road’ show garden is to create a typical suburban back garden that consumers can relate to, while at the same time inspiring and providing some new and interesting ideas that could easily be copied. The title of the garden’40 Sunbury Road’ also celebrates Peter’s 40 years as gardening correspondent for The Sun.”

Ben continued: “The Chelsea Flower Show is the perfect chance for the general public to see what new varieties we have that will be appearing at their local garden centre this May and June and how they can be used in their own gardens.

“We also supplied Ligustrum Sunshine, a bright golden dwarf shrubs that illuminates landscapes. This plant was launched in 2016.”

The RHS Chelsea Flower Show takes place on Tuesday, May 23 until Saturday, May 27 at the Royal Horticultural Society in the grounds of the Royal Hospital Chelsea.